Signing up for unemployment that is.

The actual experience of being unemployed will discussed at some point in a later post “post-facto”. For now, what I can share is my experience of adding to the 24% national unemployment rate.* Now you may be thinking, “Great. A foreigner adding to the already blown-out-of-proportion percentage”. However, I have to say that no one has complained that I’ve been paying about a third of my salary to the government since 2006… I guess I’m seeing a little ROI now.

As an American living here legally in Spain and after having gone through all of the bureaucratic red tape involved in various government processes, I was expecting the worst. I guess I should have remembered that signing up for unemployment, “paro” as it’s called here, isn’t a foreigner-only process. Let’s just say that If I had known it were this easy to sign up I would have thought about it a long time ago! (emphasis “thought about”) 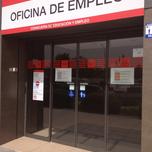 There are a few steps that have to happen before you are officially on “paro”:

1. You have to get laid off. Now, maybe this is something you’re expecting or hoping for or a complete surprise. In my case, with global restructuring and centralization, let’s just say drastic country workforce reduction (aka an “ERE” as they call it here) wasn’t exactly a surprise. But don’t do something crazy to get fired; you have to be laid off in a good way, not as a disgruntled employee gone mad throwing patas de jamón (aka ham lags) around the office.

3. You need to get an “unemployment card”. In order to get this you have to go to one of the Employment offices and sign up. It’s really pretty easy. No appointment needed. You just have to bring your NIE, social security info, proof of any studies (although they didn’t even want to see my diplomas when I went, as much as I was waiting to show them), and that’s about it. More info here: http://www.citapreviainem.es/tarjeta-del-paro/

4. You need to make an appointment to officially sign up. You’re allowed 15 days (not including Sundays and holidays) from the day when you started being on unemployment to sign up. What I didn’t realize is that you can sign up for an appointment online whenever. I waited until after getting the unemployment card (DARDE) and was given a date right on the limit to missing my first payment. Sign up here: https://sede.sepe.gob.es/contenidosSede/generico.do?pagina=proce_ciudadanos/cita_previa.html

5. Sign up. On the actual appointment day you’ll need to go with all your official paperwork from your company (or they may have already sent it electronically) and your “libro de familia” (if you have children), as well as your NIE, etc.

Overall, the entire experience was pretty smooth and painless. And thank goodness for Google to figure out how to go about everything (forget about asking HR). I have to say I was impressed as well with the channel-transition. When I signed up for an appointment online I received an online confirmation and a number. Then, when I went to the employment office on the day of my appointment, I was happy to see that there was an electronic board flashing numbers, and the one they had given me for that time was just about to be called. Even the woman handling my case was quite pleasant. Once again I seemed to have brought with me more information than was actually needed.

About a week later I received a letter in the mail confirming my paro for a year and a half. (Note: I think the longest you can receive paro for is up to 2 years (!) depending on how long you’ve been working. Back to the 24% unemployment rate…)

Hey, if being laid off was rough, at least they make signing up for unemployment pretty easy! Now if only the job hunt process would go this smoothly…

*Note: I’ve never been on unemployment in the US, so I can’t compare the experience there. If you have any thoughts, feel free to comment below.