Thirteen years ago when I was still living in the US I never would have imagined that one day I would be M.C.ing an event with the Queen of Spain and then taking a close-up photo together. Back at that stage I probably would have assumed the Queen of Spain would be older and wearing a crown as well. Not the case.

That’s me with Queen Letizia of Spain

A few weeks ago I was approached at work to ask if I would be willing to act as M.C. at an awards ceremony where I work, The International Friendship Awards, an event that recognizes distinguished Chinese and African citizens, I didn’t really think twice about it. I said I’d be happy to help, assuming that the majority of the content would be in English. (if not there would be no reason for the Queen to have to suffer through a Spanishized accent). I think they asked me for two simple reasons: international female = showcasing our modernity and internationality. To make a long story short I had to put together a short script based upon the prior year’s awards ceremony, and this script (text, language (90% English, with some Spanish mixed in)) along with my profile was sent off to the Royal Palace for approval. I was approved.

Fast forward to last week. Generally I don’t get very nervous speaking in public, but the day before the event when I started to see all of the protocol and security issues going into place, this changed a bit. To give an idea I had a detailed conversation with a coworker to decide how we were going to communicate that the Queen had arrived (as I’d be presenting in front of the auditorium with about 200 people at that time) and to indicate that she was coming down the stairs to tell everyone to stand up before she came. Hand signals? Head nod? Phone call? In the end it was a combination, but I had the vibrating phone as the final sign.

The event itself went quite well. Some nerves right at the beginning, but then it was fine. My part was a brief introduction to the audience before the Queen’s entrance and then another short speech after everyone’s arrival. Then I basically was up at the podium between different speakers, to read off the prize winners’ names and to close the event. What I found funny was when I learned later that I was translated simultaneously into Spanish (go figure). As there were too many people attending to fit into the auditorium, the event was broadcast in two other classrooms.

Here are some event pictures:

View of the auditorium center (other two sides of the room aren’t visible) from where I was. That’s the queen in the middle. Don’t miss the camera crews behind. 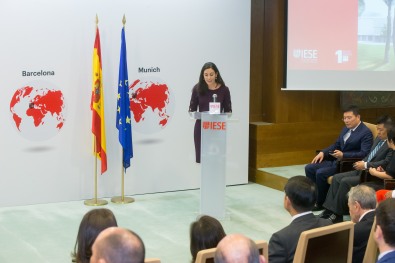 Reading off the award winners

Here’s the official event report from the Royal Palace web site (surprisingly my name made it there): http://www.casareal.es/ES/Actividades/Paginas/actividades_actividades_detalle.aspx?data=14176

After the event there was a brief cocktail with her majesty at the center. It was a bit of madness. Despite the fact that the event audience was very senior-level, educated, etc., it was crazy to see so many people almost on top of her and trying to get pictures. I managed to get mine as well; this was the one thing I had on my list as a prize for my role in the event – plus I knew my mother-in-law was waiting with bated breath to see it.

The main question I’ve gotten afterwards is what was she like up close? Was she nice? What was she wearing? Despite some things you read in the news, at least from my very very brief experience, she was quite nice and pleasant. Of course this is being judged on speaking with her for about 30 seconds and then taking a photo, but I guess it’s better than nothing. She congratulated me on my MC role, asked where I was from (I guess the Boston accent is hard to hide) and asked if I wanted a picture (yes). I really can’t complain from my brief interaction. And yes, she’s very pretty up close. As for the clothes, well there were already news reports immediately after with the brand of every item she was wearing, so better to read that than listen to me. (more info here from Hola!: https://www.hola.com/realeza/casa_espanola/20191030152854/reina-letizia-international-friendship-award/)

What I can say is that I can’t imagine having her life and having to play that role every single day. I don’t think she even got to enjoy one cocktail during the cocktail…

Definitely a cool experience though to be in a formal event with the Queen of Spain and being able to direct my speech directly to her and receive feedback! I guess I can check this off my bucket list 🙂