Since the start of my blog I’ve talked about cultural differences between the US and Spain, from my point of view as an American living for a third of my life in this country. As I travel quite frequently for work, for example to Germany, the US, Hong Kong, Nigeria, I have seen many cultural differences vs the US with these travels. However, nothing has been as interesting as my recent trip to Riyadh. So, for this blog, I’m going to talk about my perception as a Spanishized American traveling to Saudi Arabia.

To give a little background, in my work I talk with a variety of potential clients from all over the world. In the past year and a half the number of requests from companies within the Kingdom of Saudi Arabia (KSA) has increased significantly. I see this as a result of two factors: 1. Strategy 2030 within KSA – a move to become more international and modern, a top international tourist destination, etc. and 2. IESE’s FT rankings as the #1 Executive Education institute in the world. They’re tied together: as KSA is looking to gain more international exposure they’re looking to top educational institutes to grow. I have had many phone calls, proposals, etc. with a number of companies, but nothing was ever really moving forward or the conversations were difficult. Finally, however, one did move forward and after a year of conversations, proposals and negotiations I finally found myself on a plane traveling to Riyadh for a full day of meetings with the company CEO and VPs.

I didn’t travel alone. After my not so great experience last year traveling to Lagos, Nigeria, I decided that I wouldn’t travel alone, and in this case I needed to go with a male. I may not completely agree with the cultural norms in KSA, but my feeling is that if I’m going to travel and enter into a foreign country I should be respectful of the norms there  – if not, it wouldn’t make sense to go.

First off the visa process is a bit complicated. If you have to go make sure you have plenty of time. In my case as the trip was pretty much right after summer vacation there wasn’t a lot of time to get everything together. There are a number of different forms and papers to gather including an invitation letter from the KSA company, which, as one would assume, comes in Arabic. This ended up slowing down the process as the job title they had put in their letter didn’t match the one I had put on my form. Note to self – learn Arabic beforehand next time.

Before traveling I did quite a bit of research online and spoke to a female who travels there frequently for work. The main things I learned were that I shouldn’t worry too much about saying or doing anything wrong; it would probably just be best to follow what others were doing. And I definitely needed to buy some appropriate clothing (=hijab and long shirt/very loose clothing, preferably black, that covers your entire body). By the way, thank goodness for youtube with the Hijab or I wouldn’t have had much of an idea of how to tie that thing together. Apparently 1.6M other viewers also feel the same: search for “youtube how to wear a hijab”; that’s all you need.

So with a bit of preparation and hijab in hand I headed off to Riyadh. Originally we were flying with British Airways, but due to a pilots’ strike we ended up flying out with Saudia. I had never flown or heard of this airway before although my past experience with Asian or MEA airlines has been that they tend to be more luxurious than US/UK Western airlines. I was right. The plane was nice, and the business class Furla present was a pleasant surprise.

The only thing that was a bit strange was the prayer that was played over the loud speaker and accompanied by video and captions before takeoff, but I did recognize that I wasn’t going to California…

The trip started ok, but we ended up landing in Riyadh 9 hours later than originally planned… Thank god (Allah) I wasn’t traveling alone. To make a long story short, the plane had technical problems. We took off about 3 hours late from Madrid. Then the planned 45 minute layover in Jeddah where we shouldn’t have gotten off the plane turned into a 2 hour excursion into the airport while we waited for a new plane.

Once on the new plane and about to take off we received a message that there were new technical issues and we had to go back to the airport and back to the lounge. At that point I wasn’t even sure if we would make it to Riyadh for the meetings I’d been working on for so long. To top things off my companion had his Apple watch stolen (I still find it hard to believe that this happened in a place where you could get your hand cut off for a crime like that), but in any case it disappeared in the security line when they made him take it off and put it in one of the trays. The only thing I can think of is that either it (a) fell down somewhere and got lost in the moment or (b) was stolen by another passenger behind him. What didn’t help is that I was in a different security line as a female so I didn’t see a thing.

Getting off the plane in KSA. As soon as the plane landed everyone put on their formal outfits and covered up

What was interesting to see was a number of women more relaxed with their clothing on the flight from Spain. As soon as the plane landed in KSA, however, they immediately covered themselves up.

There were many women working in the airport, mostly in the security lines and in the passport immigration section, all completely covered except for their eyes. I had seen this type of clothing in pictures but it was quite shocking to see so many women walking around only with a small slit to see through, especially as an “uncovered” woman watching the scenes play out.

Fast forward – we finally made it to our hotel at 9.30 in the morning, over 9 hours later than originally planned. As we had all important meetings planned for that day sleep wasn’t an option. A quick shower and a hijab/loose clothes change later we headed out to our meetings.

Everyone has asked me since the trip and since seeing pictures if I had to wear the hijab. The short answer is no. No one was there forcing me to put it on or watching over my shoulder (probably two years ago when women weren’t even allowed to be out on their own this would have been the case), but, in all honesty, I wouldn’t have felt comfortable without it seeing that all other women that I saw around the city had their heads covered. To me it was showing respect to my colleagues as well. As I was making a presentation in front of 50 (almost all) men I didn’t think now was the time to be making statements. In my opinion it was already quite modern and a statement to be having a female in this role.

Overall I was treated very respectfully and felt comfortable speaking during the meetings and presenting in front of the group. Probably the most uncomfortable part was having my hijab falling off during the presentation and awkwardly trying to fix it with one hand as I was holding onto a microphone at the same time with the other… 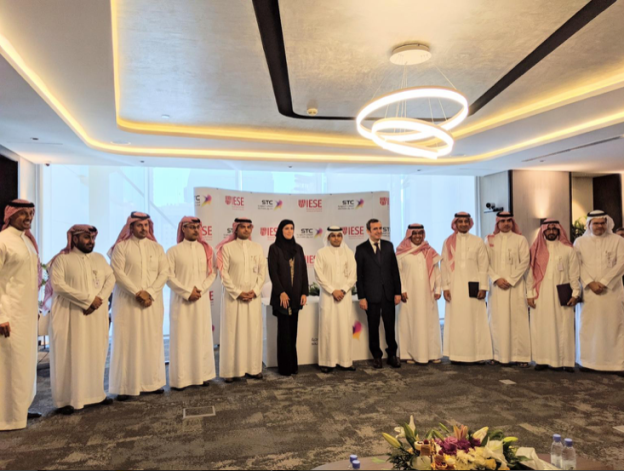 That’s me with my black hijab and my colleague in his black suit. Apparently, no one told us about the dress code…

As for the office setting, overall it was very formal. Despite all the changes and modernity that the country may be going through there is still a long way to go. Two years ago females couldn’t work or drive or probably be even seen alone… there were a handful of women at the office where we went (half totally covered except for their eyes, the rest showing only their faces), but overall it was still a very male-dominated environment. All of our meetings were very formal, and you could see the strong sense of hierarchy within the organization. You could also see the strong sense of hospitality – I can’t even remember how many fancy types of dates we were offered or fancy Arabic tea/coffee and chocolates. At one point we had to just refuse, even if it could have been seen as rude. One can only have so many cups of Arabic coffee…

As I said I felt quite respected in the meetings and the overall reception was great. However, there were a couple times where I noticed a man not being able to even look at me, and one instance in which I was refused a handshake (I only offered it as I saw that this was in general what everyone was doing, but I guess in this case as he was wearing a different type of clothing I should have guessed there was something different – I still haven’t figured it out). While we were in the hotel I took off my hijab, but in general I definitely felt more comfortable with it on.

My experience in Riyadh was short-lived; 12 hours after arriving we were already making our way back to the airport. I can’t say that I was sad to be leaving given the overall experience, but it was certainly eye-opening to be there as a female and not exactly out of the spotlight. I’ll be going back in the future for work and, while I don’t see myself running around doing touristic activities or driving a rental car, I’ll look forward to seeing continuous changes as the kingdom itself keeps evolving and modernizing.