Today I had an interesting experience at the BBVA branch near my apartment. I say “interesting” because it was a mixed experience. I wouldn’t say it was a bad experience as the woman who helped me was nice; however, there were several things that went on during this interaction that were just basic customer service 101s gone wrong. Overall the employee was efficient and helped me to complete my transaction with a smile (minus one snafu – #7 below), but as with any experience with a bank here there are areas for improvement… :

Overall a good attitude is the most important thing, and the woman helping me was nice, but a few quick fixes could go a long way to the overall experience here.

First interaction (not-even-close-to-good) Not too long ago I went to the BancSabadell branch on Calle Orense (Madrid) to conduct the simple transaction of depositing cash in my account. Now you might be wondering why this even deserves a post, but you’ll soon find out. When I entered the branch there was one person in front of me and another currently being helped. There were two tellers at the main desk (or so it appeared): one to the right who was dealing with the current customer, and a woman to the left with a plaque in front of her reading “Servicio al cliente” who seemed busy on her computer, but without any customers. Now, even if you don’t speak Spanish you can probably tell that this means Client Service. The woman sitting behind this sign seemed to be completely oblivious to the fact that there was a line of people waiting to be helped. The person in front of me moved forward, and I promptly moved to the “Servicio al cliente” woman and asked if she could help me. She looked up, gave me an obviously annoyed look and in a rude tone stated that no, I had to wait in the other line to be helped. I said ok, I’m just surprised because it says “Servicio al cliente” right here. She quickly retaliated and said “No, this is a work desk. Go back and wait in that line. “ She then returned to her computer screen. 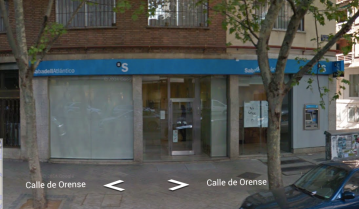 Now, after many years in Spain I’ve gotten used to the service, but could not believe the blatant rudeness and comic element here with the plaque in front of this woman. In the past I would not have said anything, but this time after the other teller (who was also quite unpleasant with me likely because she heard my conversation with the other teller) finished with my deposit, I said I’d like to speak to the manager. Her response was that the manager was not there and she did not know when he would be back. I asked for his name, which she did give to me, but to actually make the effort to go back to the branch at another point to try to talk to someone who likely would treat me in a similar manner was enough for me to just leave in an angry mood and bitter at BancSabadell.

Note to BancSabadell: the customer-facing part of your business and the daily interactions that your employees have with your customers are critical! An experience like this will not leave a customer feeling eager to invest in any other products at your bank.

Any employee who is client-facing (literally) and especially one with a “Client Service” sign in front of them should be prepared to treat customers with respect and a smile!

Just the other day I walked into the same branch where I had had the wonderful customer service experience earlier detailed. This time I was going for a more “difficult” request, as I was interested in running a loan payoff simulation. Instead of going to the tellers, I immediately walked into one of the private customer areas and interrupted a woman who was busy at her desk to ask if she could help me. She immediately looked up, smiled and said that of course she could help me. And she did just that, with a smile.

Unfortunately the interaction that stands out in my head and that receives a few paragraphs compared to this last interaction is the negative one.