In my 13 years here I’ve found one place with decent Halloween pumpkins – Costco. If you’re like me and love Halloween and pumpkin carving, then you’ll probably be disappointed with the pumpkins you find at the local supermarkets. Even the “large” calabazas that some of them sell (compared to the small ones that look like overgrown apples) still aren’t that great; you’re lucky if you can even get a decent pumpkin face on one of the ones from Mercadona or Carrefour.

The best place I’ve seen so far is Costco, the American wholesaler. There are only two locations in Spain so far (one in Madrid (Getafe), fortunately, and the other in Seville).

To give you an idea of the size, here’s my almost 3-year old sons with one: 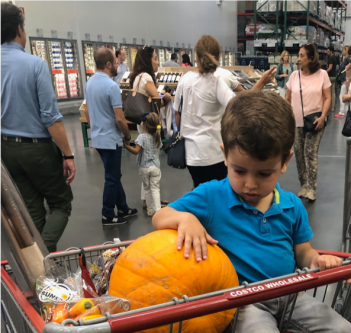 For me going to Costco is like walking into the US – with all the American brands, everything in bulk like at Sam’s Club or BJs (or Costco) back in the US, and usually some scattered American accents around the store. I could spend hours there just browsing around. The only issue is that you need to be a paying “socio” to go into the store. It costs 36€ a year just to be able to go to the store and buy. The prices aren’t at all cheap, and you can usually expect to spend at least 100€ every time you go, but the quality is great.

Aside from pumpkins, there are two other great things at Costco:

Here’s an image of the pollo asado factory and lines to get them today at Costco: 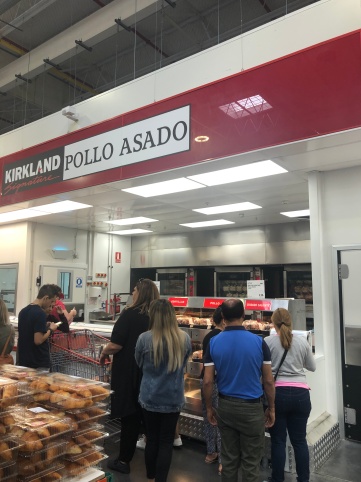 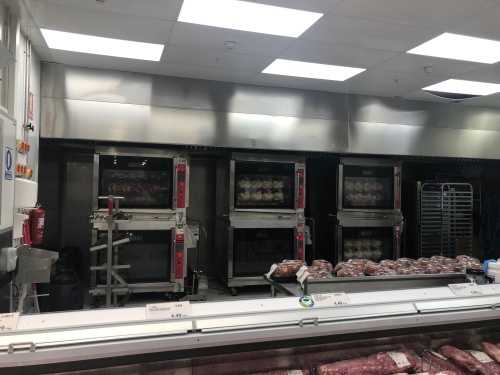 And a recent article in CNN :

Who knew the Costco rotisserie chicken was a cult item in the US even with its own facebook page – yes, I’m now a fan. 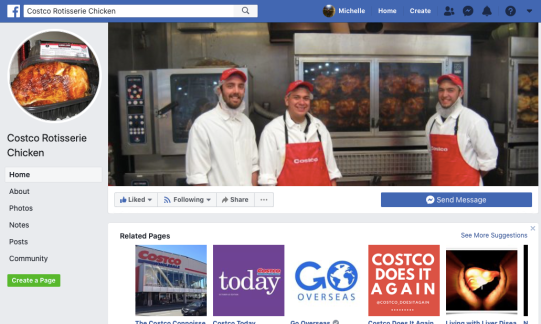