Urban Dictionary definition: Spanishize: “the process by which one becomes spanish.” In my opinion this word isn’t so much about the process, but more about the final product. Getting used to the lifestyle and culture is one thing; starting to think and dream in Spanish and mixing up your English is another. That’s when you really understand the definition.

The other day I stumbled upon an article in thelocal.es called “Ten signs you’ve been spanishized”. http://www.thelocal.es/galleries/4/ten-signs-youve-been-spanishized

As an American in Spain, reading this really made me laugh, and at the same time I realized once again that this definitely has happened to me. A few years ago, if I had looked at this article I probably would have just chuckled. But reading this now, it all just seems to make SO much sense (another sign). Since it fits in with the “Who Am I?” section of this blog, I thought I would share these signs and add a few of my own commentaries:

1. You’ve gone all touchy feely. I wouldn’t say this is a bad thing by any means, but it is true that the culture here tends to be more physical. I’ve noticed this particularly in the workplace where it’s completely normal to be touchy feeling with coworkers  while telling a story or give someone a kiss/hug before and after vacation periods. Coming from the US where personal space is more coveted than a parking space, this can be a bit uncomfortable at first. Over time though you just find yourself reaching out to everyone.

2. You’ve started yelling at waiters. You have to get their attention somehow, right? Of course now back in the US I feel the need after the 10th time my waiter/waitress comes up to me to see how I’m doing and if I need anything else to just say “I’m going to give you your 20% tip; please just give me a little space!” (and to think I used to be a waitress)

3. You have breakfast in a bar. The word “bar” itself has a different meaning in Spain. You can sometimes get the best fresh-squeezed orange juice, coffee and morning breakfast pincho (little appetizer) at a bar. Or if you feel like adding a caña (small beer) in too, that’s quite alright. Bars are pretty universal for breakfast, lunch, dinner, drinks, you name it and can be similar to a restaurant. I wouldn’t think twice about taking my baby in his stroller into a bar with me here; and I don’t think anyone would look twice either. 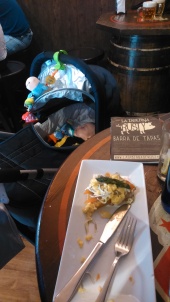 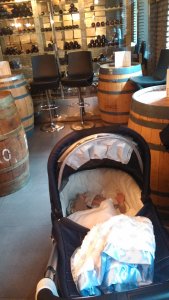 4. You’ve lost your political correctness. Being P.C. goes out the window with a little time over here. You can try to maintain your P.C. righteousness, but trust me; it will just fade over time as you realize it’s not conscious prejudice, but really just a cultural way of being in a country that’s still new to having a large foreigner population.

5. You’ve stopped being so polite. As Americans we tend to be overly polite and apologize for everything, especially within work environments. You’ll soon realize no one else is going out of their way to be polite, so maybe you need to think about it as well. The first time I realized that I had changed with this was at work (I was the only American in the office) during a phone call with international colleagues. The Americans were being way more polite than us, and they were really getting on my nerves! Also, when your boss tells you during an evaluation that if people are yelling at you in a meeting that you should yell back, well…you can see how being polite goes out the window.

6. You keep mixing your wine and beer with stuff. How would it work if you didn’t mix it?

7. Dead animal bits hanging up seem normal. It’s clear that the sign of a good tapas bar are a number of ham legs hanging up when you walk in. After a while you don’t even notice them anymore; trust me. You’ll only notice them when you’re with someone who’s visiting. 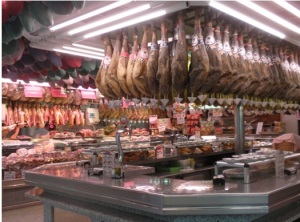 8. You tackle Spanish bureaucracy with confidence. After getting my NIE (national foreigner ID card), getting married, renewing working papers, switching a work residency card to a non-working residency card, getting a marriage residency card, having a baby, getting an EU license, signing up for unemployment…let’s just say that you get used to the lengthy document collection processes. By the time the third one rolls around you’ll already have the fingerprint process down pat. You’ll be prepared with 3 photocopies of everything in hand and and a stern face to deal with the disgruntled government worker.

10. 8pm seems way too early for dinner. 9pm just seems normal. With working hours generally on the longer side here, it would be hard to try to have dinner US-style at 6pm. Plus, I can’t imagine now going to bed hungry.

If you read all of these without a blink and they just seem normal, that may be a sign of being spanishized. Now, this isn’t necessarily a bad thing; just don’t forget to think twice before applying some of these in the US. Take this as a little piece of advice from an American in Spain who perhaps (only perhaps) may have had a few embarrassing moments while back in the US…