In 2011 after being in Spain for over five years I decided it was time to finally get over my pride and annoyance and sign up for a driving school. It still, to this day, seems ridiculous to me that there’s no agreement between Spain and the US where US drivers can have their licenses homologated, but that’s one of the prices to pay for being an American in Spain. And there’s really no way around it if you want to drive here. Sure, you might think of getting an international driver’s license with AAA when you’re back home and technically you can use that here for 60 or 90 days but that’s not a long-term solution. What happens if you have an accident and the police see that you’ve been living here for years and are just now using an international license? Not a good idea. 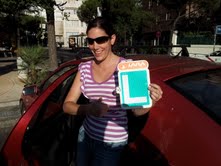 In my opinion, even though it’s frustrating to have to go back to driving school, it’s worth it to get your Permiso B that you can use anywhere in the EU. And on the bright side, you’ll learn driving shift (and probably end up liking it more than automatic).

There are countless numbers of “special offers” from drivers schools that offer a fixed rate including a course for the theoretical part of the exam and 10 driving lessons. The offer is relatively inexpensive (I think mine was 89€), but think twice before signing up for a special offer with few classes. Learning to drive shift is like learning to drive all over again.

After huffing and puffing and deciding that I would go to driver’s school, I first tried to look into the option of just getting a license to drive automatics. Then I discovered that this is really only an option if you’re handicapped. So… I then went down the standard route and signed up for a course at Lara Autoescuela (http://www.autoescuelagala.com/es_ES/) near Cuatro Caminos in Madrid. I started out with the theoretical classes at night, going along with the shiny new book they gave to me when I signed up. After a few classes I was starting to get bored with learning things like how to drive in the rain (been there, done that), but I kept going to make sure I had the vocabulary straight. After a few months of theoretical classes and countless numbers of computer exams, I boarded the big bus with a few dozen of other hopeful 18 year olds to take me to the driving exam at the Motor Vehicles registry in Móstoles. Believe it or not, with so many people taking the exams every day, they’re not electronic, but actually done on paper. You turn them in and get the score a few hours later.

You’re allowed 3 wrong answers; I had 4… .who knew they were going to ask me questions about types of gloves while driving a motorcycle. I never said I had plans to drive a motorcycle… After these results I threatened dropping out, but then I realized I had gone this far (and already paid). I passed the next time.

The actual driving was a whole other story. Learning to drive standard is tough when you’re used to driving automatic. When I first met my driving “professor” I was shocked to learn that he was younger than me. I’d been driving for way longer than him. But… I’m not going to lie: I had a few instances of my car going backwards down a hill and people honking at me because they saw the big “L” and car screaming “STUDENT DRIVER” on the road. Once I finally got the hang of it, it got easier, but just a warning to anyone thinking about signing up to get their license: 10 classes to learn to drive standard are not enough. I ended up buying 8 extra classes at 27€/class (that’s where they get you with the money). Another place they get you with the money is the “renovation” (renovación) tax. When you sign up with the driving school you have the right to take 3 exams (theoretical or practical). This means if you fail twice you have to pay the tax again. I remember having to pay almost 300€ for everything.

So, what happened during my driving exam? Everything was going smoothly until I drove as if I had 15 years of experience…wait a minute; I did have 15 years of experience! I was driving at a fast pace (not speeding of course) when I approached a traffic light that turned yellow. Now I literally would have had to slam on the brakes to stop at the light, so I pushed the gas and went through it. FAIL. Don’t repeat this on your exam. Apparently it’s better for the driving examiner to get whiplash than to go through a yellow light. Fortunately, the next time I took the exam I didn’t run into any snafus and passed. And now I’ve been happily driving around in Spain for almost four years, and only had one accident (I’ll save that for another post).

Here are my tips for signing up for driving school and passing: